Low Earth orbit (LEO) satellites are deployed between ~400 and 2,000 km above the surface of the Earth. At this altitude, LEO satellites deployed for broadband communications purposes experience a significant advantage with respect to round-trip (~3 milliseconds) and inter-satellite latency, compared to GSO satellites. The LEO satellite constellations also offer increased performance due to advanced modulation schemes, multi-beam antennas, and more sophisticated frequency reuse schemes143.

The primary disadvantages of being deployed in LEO include experiencing some atmospheric drag leading to loss of orbit, and shorter life spans of the satellites. Also, due to their high apparent angular velocity, LEO satellites have a smaller “dwell” time (in which the object is visible to one part of the Earth). In order to overcome these challenges, satellite operators are required to use a constellation of satellites (with multiple orbits that differ with respect to location and time) to provide global coverage and visibility.

Modern LEO satellite internet proposals were first publicly discussed in 2014. Earlier LEO projects from companies such as Iridium and Globalstar had previously been proposed in the 1990’s144. These earlier projects failed largely due to the prohibitive manufacturing and launch costs of satellite technology at the time.

Over the past three decades, advances in satellite technology (e.g. smaller size and mass, antennae technology, and configurable radio-frequency payload systems) and practices (i.e. mass production, multiple-payload launches and reusability) have significantly reduced satellite production and launch costs. This has resulted in an increased interest in the possibility of LEO satellites to provide affordable, high-speed and low-latency internet to the Earth’s most remote and unconnected regions. The throughput promised also far exceeds that which can be provided by any realistically deployable network infrastructure.

Due to this, the period from 2018-2021 saw an explosion of satellite broadband providers launching satellites into low Earth orbit, with the most advanced of these moving shortly afterwards to beta testing.

At the time of writing, the three LEO constellations at the most advanced stage of development are SpaceX’s proposed 4,425 Starlink constellation in the Ku-Ka band, OneWeb’s 720 satellite system in the Ku-Ka band and Telesat’s 298 satellite Lightspeed constellation in the Ka band145. Of these three companies, SpaceX moved to the beta testing stage in October 2020, while Canadian provider Telesat has set the second half of 2023 as its target for launching commercial services146, 147. After a period of difficulties in securing financing, including a bankruptcy filing in March 2020, OneWeb (now owned by a consortium that includes the UK government) has operated a consistent launch schedule, launching its 200th satellite in May 2021. OneWeb expects to launch global commercial services by 2022148.

Currently, LEO broadband services are advertised to provide significantly higher download and upload speeds relative to comparably priced wireline plans. In a filing with the US Federal Communications Commission, SpaceX claimed it can currently deliver 100 Mbps download speeds and 20 Mbps upload speed on its existing LEO network, at a cost of $129 CAD per month (in addition to a one-time $649 CAD hardware and installation cost149). Once fully deployed, its goal is to offer download speeds of up to 10 Gbps.

While LEO providers all operate on the same basic hardware, business strategies and orbital arrangements vary widely between them. OneWeb plans to partner with telecommunications providers to offer its services, while Telesat’s initial focus has been on the non-consumer market, including the government and defense sectors, as well as providers of specialized services150.

These differences in business models and technologies mean different ground systems arrangements are required to aggregate and relay the satellite signals at the community level. The location and number of ground stations and gateway antennas will play a significant role in total system throughput and geographic service area.

It is estimated that SpaceX’s Starlink constellation will require 123 ground stations and 3,500 gateway antennas to reach maximum throughput globally152. It is important to note that, currently, the geographic reach of SpaceX’s Starlink service is limited to below the Earth’s 55th parallel, above which the company has little ground segment infrastructure and has yet to deploy polar orbiting satellites. The figure below shows a segment of Starlink’s physical infrastructure on and above North America (the white dots represent orbiting satellites, while the orange icons show the location of ground-based gateway antennas). This demonstrates the interrelation of ground and terrestrial infrastructure in determining service area. 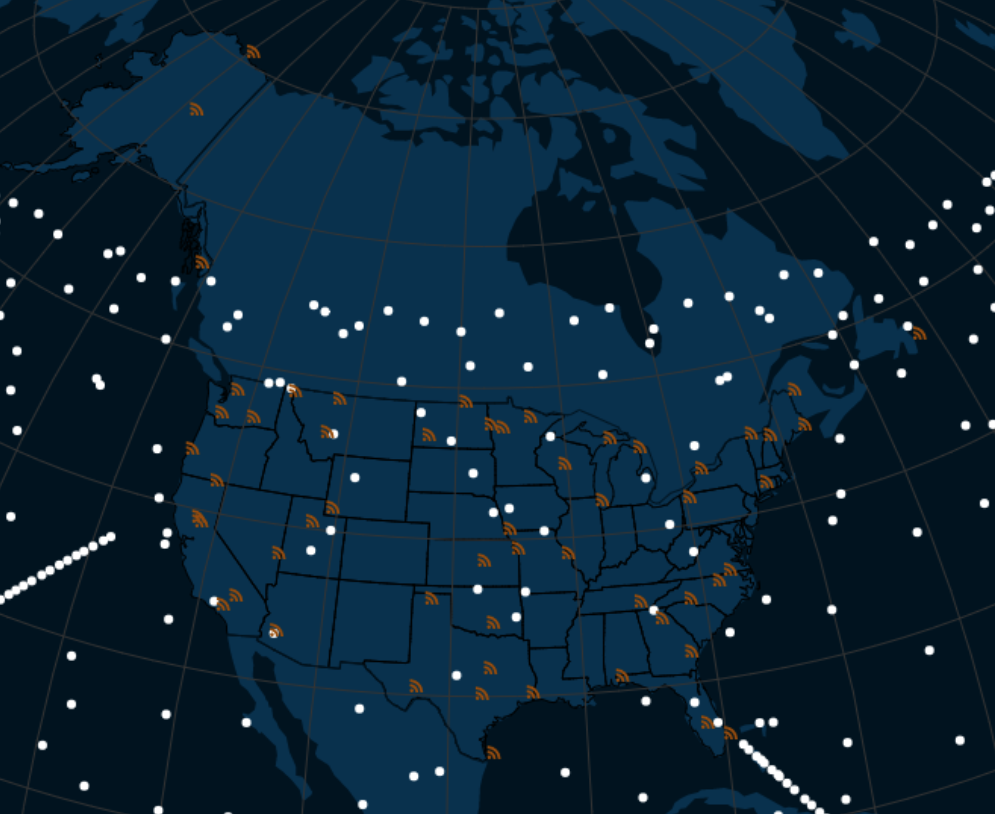 Telesat will make use of optical intersatellite linking, whereby satellites within a constellation are able to relay data to each other and not solely to individual points on the ground. This system, which is in effect a terrestrial mesh network, will allow any user to connect to Telesat’s constellation from anywhere on Earth without needing a direct line of sight. This significantly reduces the need for ground systems infrastructure. Telesat plans to build 30 ground stations worldwide to service its network154.

Because OneWeb will not utilize optical intersatellite linking, subscribers will need to have direct line of sight to both a ground station and an orbiting satellite. In contrast to both Telesat and SpaceX , OneWeb’s constellation will comprise 18 orbital planes, each made up of up to 40 satellites orbiting longitudinally, or “pole-to-pole”, across the globe155. The orientation of these planes and the footprint of each of the constellation’s satellites will ensure that users are always within the field of view of at least one satellite at any given time156. The segment of OneWeb’s existing partial constellation is shown below, with the white dots representing orbiting satellites. 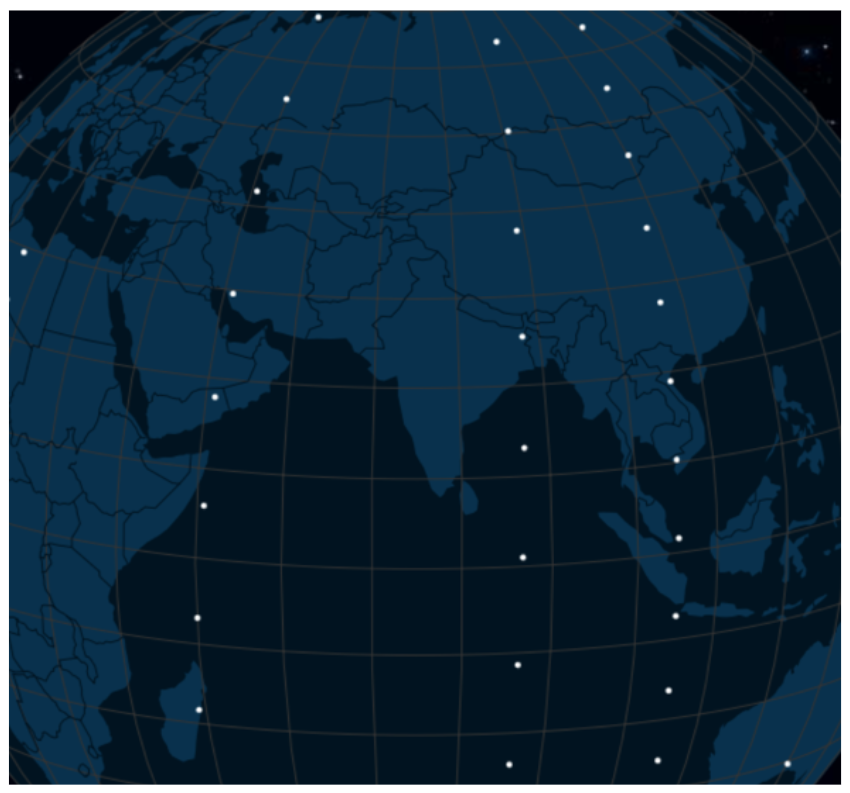 There is significant interest and potential to provide affordable and reliable internet service to remote and rural communities via satellite technologies. In Alberta, the SuperNet could play a key role in supporting satellite internet by giving ISPs wholesale access to middle-mile infrastructure to link upstream internet sources with terrestrial-based satellite gateways. Similarly, throughout the rest of Canada, affordable wholesale access to long-range backhaul fibre networks that are fed by satellite technologies will be critical to providing economical high-speed broadband services to consumers in rural and remote communities.

144Mckinsey. Large LEO Constellations: Will it be different this time?