An Internet Protocol (IP) is a communications protocol system that identifies and locates computers or devices on networks, and routes traffic across the internet.

According to Vint Cerf, founder of Transfer Control Protocol/Internet Protocol (TCP/IP) and current Chief Internet Evangelist at Google, Pv4 (Internet Protocol version 4) became the underlying protocol for the global internet when it was first designed in 1973. However, the founders of the internet did not anticipate the explosion of the internet. IPv4 address space allocation — similar to telephone numbers — is sufficient for only 4.3 billion termination points in the internet. Its store of 32-bit addresses was never intended to facilitate the formation of the global commercial internet as it exists today.

As a result of the expansion of the global internet, and increase in connected computers and devices, the IPv4 address “free pool” for the American Registry of Internet Numbers (ARIN — which administers number resource allocation in Canada, the United States, and parts of the Caribbean), was completely depleted by September 2015. (See Figure 19.) The remaining four Regional Internet Registries (RIR) are also nearing depletion of IPv4 number resources. This has resulted in an IPv4 address transfer market, where organizations with an excess of IPv4 resources can either return them to the RIR, or sell them to another organization that qualifies for resources under an RIR policy.

When ISPs run out of viable IPv4 addresses, an ISP may not be able to give individual subscribers their own IPv4 address. Instead, to conserve resources, they may opt to put customers behind Carrier Grade Network Address Translation (CGN, NAT).

IPv6 is comprised of unique 128-bit address as opposed to 32-bit addresses, and therefore features an exponentially larger pool of addresses to accommodate exponential growth of connected computers. 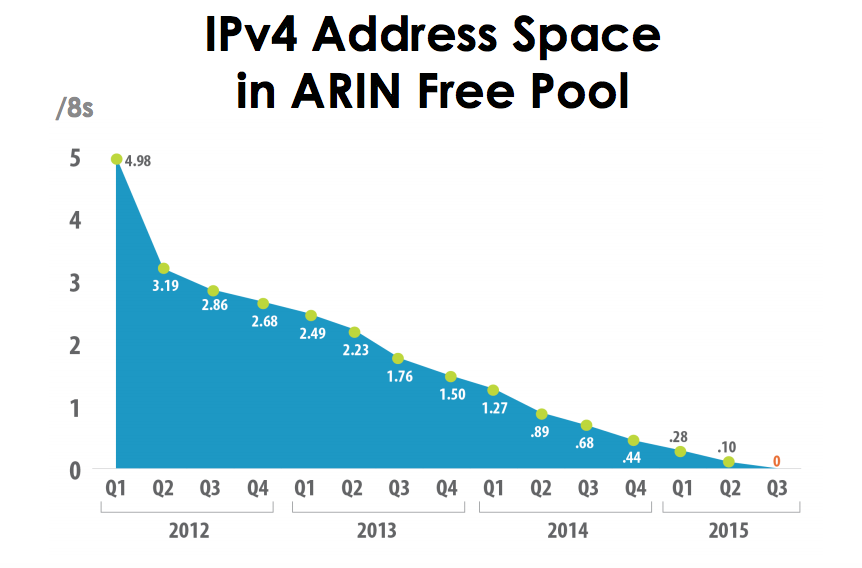 While IPv6 has existed as a protocol for almost 20 years, uptake has been slow until the recent exhaustion of the IPv4 free pool. Because the majority of the internet continues to be accessible via IPv4 only, IPv6 must coexist concurrently, or side by side, with the fullyfunctional IPv4 public internet. This “dual stack” architecture will continue to be necessary into the foreseeable future, until such a time that IPv6 becomes the default standard. “Tunneling” is a method which allows IPv4 and IPv6 to coexist. When two systems on the edge of a network support IPv6, but the routers on the public internet between them do not, IPv6 packets can be put inside IPv4 packets, and “tunneled.” Additionally, IPv6 packets can be translated into IPv4 packets utilizing NAT64 — a Network Address Translation technique.

Without the expansion of IPv6, and eventual replacement of IPv4, diffusion of the internet — including expansion of the Internet of Things (IoT), the “industrial internet” and sensor networks — will be limited by the resource and network management constraints of IPv4. The sheer quantity of devices projected to come online cannot be supported by IPv4. The future of internet connected devices and sensor networks relies on the transition to IPv6.

Figure 20. IPv6 Adoption in Canada and the United States based on accessing Google via an IPv6 connection (as of 13 July 2016)200

According to Google’s statistics, IPv6 adoption has increased rapidly in recent years. This can likely be attributed to the exhaustion of IPv4 resources, leading to the increased immediacy of a full transition to the new protocol. 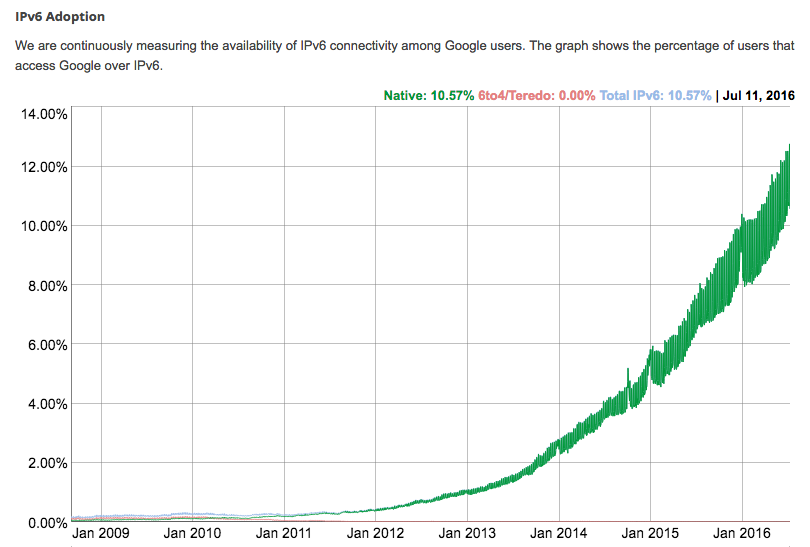 The American Registry for Internet Numbers shows similar statistics for uptake based on member ISP requests for IPv6 resources (Figure 22). 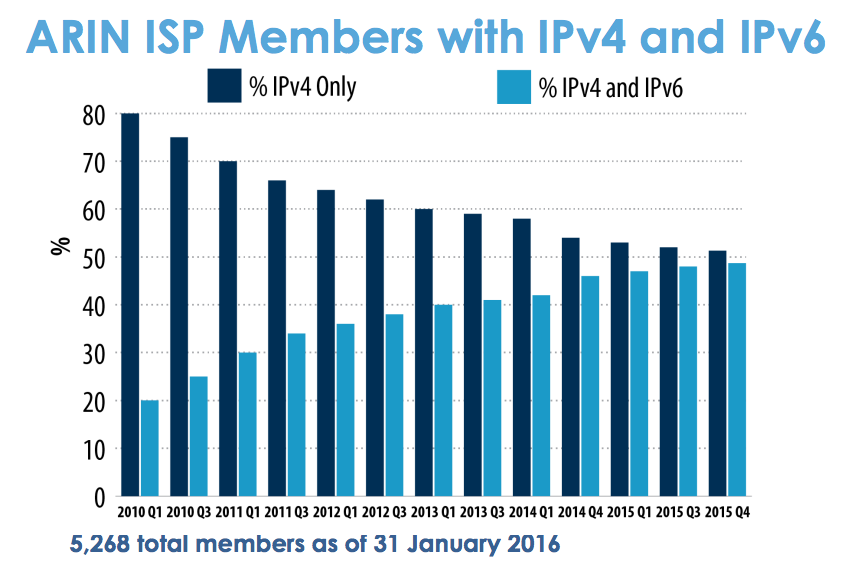 Governments have the opportunity to play an important role in promoting IPv6 expansion and awareness. First, governments can implement IPv6 in their internal network operations and product cycles. Second, they can coordinate with industry to provide incentives for IPv6 adoption. Third, governments can make IPv6 functionality a condition of any network infrastructure related procurement. There are free resources available for IPv6 training available through ARIN’s IPv6 wiki, and consultants working in the area of IPv6 offer workshops and seminars to assist network policy makers and operators with the transition.