The Alberta SuperNet is a fibre optic network of cables and wireless access towers that connect public institutions across the province — schools, hospitals, colleges, universities, libraries, and municipal offices22 — to a broadband network. The goal of the SuperNet is to provide high-speed networking and internet access to these public institutions to enable efficient and ubiquitous delivery of business and social services.

The SuperNet is designed to cover Alberta’s large geographical area (661,000 km2)23 and to serve both the urban and rural populations. 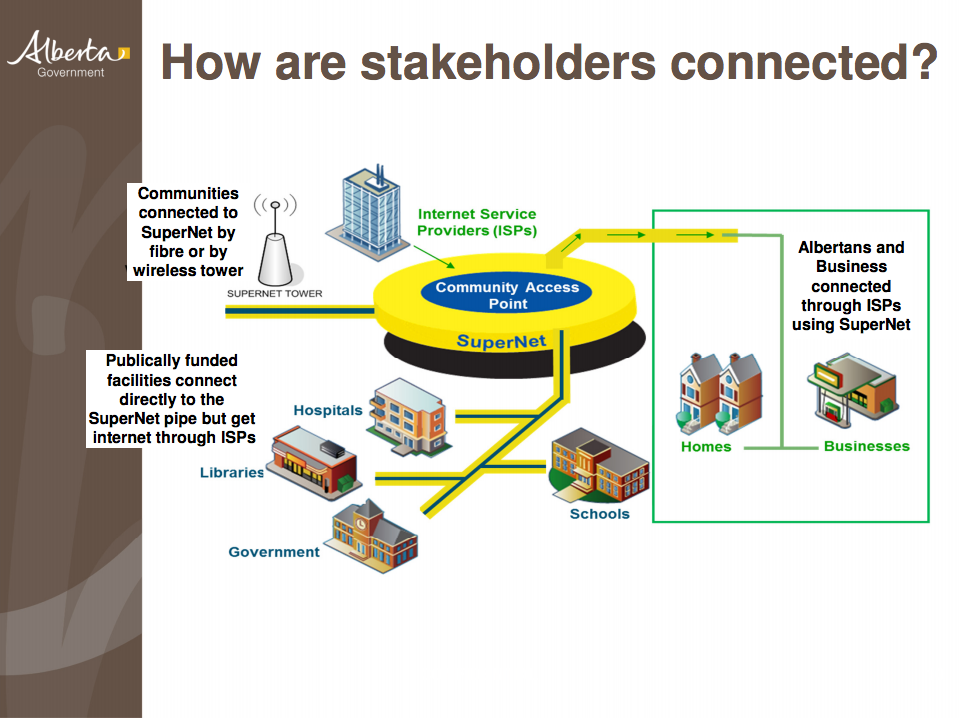 The SuperNet was a $295 million strategic infrastructure investment by the Government of Alberta ($193 million) and Bell Canada ($102 million). Construction was completed in 2005.25 Final costs, including subsequent extensions, were approximately $330 million.26 At the time of completion, the SuperNet was the first jurisdiction-wide fibre optic network in North America.

The SuperNet is governed by Service Alberta, a ministry of the Government of Alberta. The operations and management of the SuperNet were contracted to Axia SuperNet Ltd (a wholly owned subsidiary of Axia NetMedia Corporation) on the Extended Area Network (EAN), and to Bell Canada on the Base Area Network (BAN).

The SuperNet consists of over 15,000 km of fibre and 1,930 km of microwave connectivity, comprised of Axia and Bell owned fibre and network assets combined with licensed assets from the Government of Alberta.27 The initial agreement spanned 2005-2015, and was extended from its initial 10-year term for an additional three-year period until June 30, 2018.28

At the time of the awarding of the initial SuperNet contract, Axia was a Calgary-based company with limited experience in telecommunications.29 It has since expanded operations into France, the United States, and today operates almost 30,000 km of fibre.30 In March 2016, Axia Netmedia Corporation received an acquisition offer of $272 million by the Swiss firm Partners Group and the deal was finalized on July 29, 2016.31, 32

The June 2018 expiry of the SuperNet operating contract is providing government with an opportunity to review the approach for SuperNet and look at possible ways for it to help enable improved rural internet services, while enhancing the delivery of online government services to Albertans. On February 16, 2016, Service Alberta issued a Pre-Qualification Request (PQR), to identify potential service providers, to review business and technical requirements, and to gather current information on industry trends.33 Service Alberta also issued a concurrent Request for Proposal (RFP) for a procurement fairness monitor.34 In May 2016, telecommunications operators Axia, Bell, Telus, and Zayo were prequalified to participate through the PQR process.35 Service Alberta are also acting as an advocate to the federal government with regards to the internet needs of rural Albertans, and advocating for access to federal broadband funding.

The Alberta SuperNet is a backhaul network (or ‘middle-mile’) that connects on one end to local access networks (‘first-’ or ‘last-mile’ connections) and on the other end to separate networks that connect to the internet. It consists of base area (BAN) and extended area (EAN) fibre networks, as well as an extended area wireless network (EAWN). The BAN connects 27 larger urban centres, while the EAN and EAWN reach 402 smaller rural communities (see Figure 8 and Appendices: A1. Networking – SuperNet BAN, and A2. EAN and EAWN communities).

The BAN and EAN are supported by Meet-Me-Facilities (MMF) and Points of Presence (PoP), respectively, in each of the communities, to allow interconnection to other networks (e.g. access networks). The EAWN is specifically used to connect remote communities to the SuperNet. Overall, the SuperNet connects over 4,700 provincial (government, learning, health, library) and municipal facilities.36

The Government of Alberta set a universal fee structure across the province for monthly flat-rate services, irrespective of a subscriber’s physical location. This model contradicts conventional private sector telecommunications billing practices, where rates tend to be lowest in urban centres and highest in rural communities.

The SuperNet does not directly serve residential subscribers. It is intended to provide affordable wholesale fibre access to local ISPs. The ISPs can then provide last-mile connectivity and internet service to residents of SuperNet communities. For a partial list of ISPs providing services through the Alberta SuperNet, please see Appendix A3.

Public sector organizations that utilize Axia’s Next Generation Network (NGN) services include Government of Alberta ministries, schools, health facilities, libraries and municipalities.37 School districts receive subsidies for each site of $800 per month that may only be spent on connecting to the Alberta SuperNet to help offset costs.38 Pricing for NGN services were revised in September 2015 for all ministries and effective until June 30, 2018. Previous to that, only Alberta Education had been able to utilize updated pricing. These packages provide bandwidth services across all government ministries, with the goal of delivering “dramatically higher bandwidth rates at a significantly lower cost per megabit.”39 Of note, the cost of connecting First Nations schools to the SuperNet is covered by the Federal Government through the department of Indigenous and Northern Affairs.40 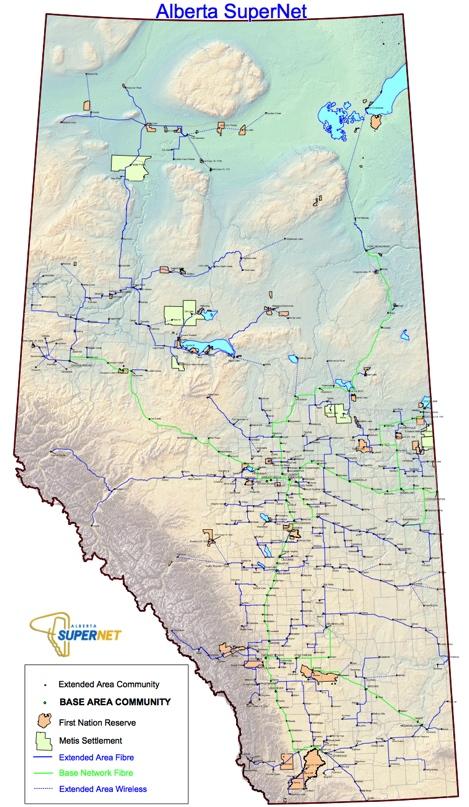 Figure 8. Map of the Alberta SuperNet showing the Base Area and Extended Area Fibre Networks and the Extended Wireless Area41